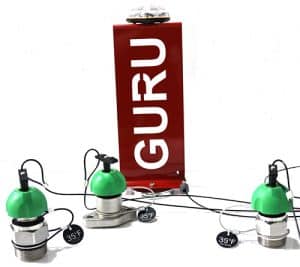 ThermOmegaTech®’s GURU® Plugs utilize self-actuating, thermostatic technology to automatically monitor the water temperature in a locomotives engine coolant and water storage tanks. When the actuator senses that the temperature in the water-bearing system has reached the set point of the valve, the plug opens and drains the water from the tank before it can freeze. The plugs are completely mechanical and require no electrical or air connections to operate.

ThermOmegaTech® recommends that GURU®s should be replaced every 18-24 months. According to Mrs. Logue, “The characteristic tendency of the GURU® Plug actuator is to lose some small amount of stroke as it ages. While this change is a ‘safe’ tendency relating to freeze protection, the upward creep could cause nuisance-dumping. Our rebuild program returns the refurbished valves to the standards of a new plug, achieving peak performance.”

Mrs. Logue notes that during the rebuild process, the plug is completely disassembled and checked. Interior components are replaced, and the refurbished valve goes through three tests to ensure full functionality before being returned to the customer: Cartridge Test, Leak Test, and Pop Test.

The program will be operated out of ThermOmegaTech®’s company headquarters and manufacturing facility in Warminster, PA USA where the valves were originally assembled, tested, and distributed to their end users. GURU PC® valves, used to protect passenger cars from freeze damage, are also eligible for the GURU® Rebuild Program.