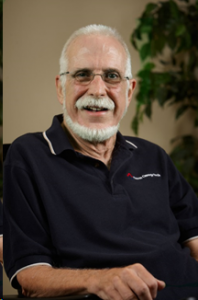 Fred was born on February 17, 1946 in San Antonio, TX to Charles Earl Pirkle and Zutella Bones Pirkle. He lived in San Antonio throughout his childhood and graduated from Harlandale High School in 1964.

In 1970 Fred received a B.S. from the Department of Industrial Technology at Sam Houston State University in Huntsville, TX and in 1972 he received a Masters degree from the same place.

END_OF_DOCUMENT_TOKEN_TO_BE_REPLACED

Fred Pirkle, aka “Shotgun Fred”, founded ThermOmegaTech® in 1982. Since then he has patented more than 20 products, including the first temperature control device for charcoal grills/cookers – hence “The BBQ Guru” was born in 2004.

In April 2011, Fred was diagnosed with ALS. As his friends and family are well aware, he is a fighter and continues to fight the disease every day. In Fred’s honor, and in an effort to help support patient service programs and ALS research, ThermOmegaTech® and The BBQ Guru have joined forces with the ALS Association. We are a corporate sponsor of and have formed a team, “Shotgun Fred’s Guru Crew”. On Saturday, November 5th we participated in our first Walk to Defeat ALS.

For more information about ALS or this event please go to www.alsphiladelphia.org

The International Plumbing Code, 2006, paragraph 701.7 reads, “Wastewater when discharged into the building drainage system shall be at a temperature not higher than 140°F (60°C). When higher temperatures exist, approved cooling methods shall be provided. 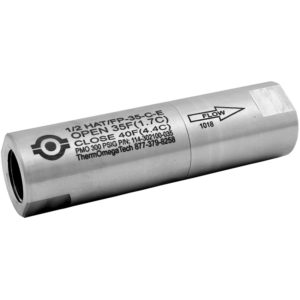 This prevents the formation of ice that can clog lines, shut off flow, and cause pressure within the line to build, cracking pipes, valves, and fittings, as well as dam- aging equipment. Damage due to ice formation can incur costs for replacement parts and labor, and reduce productivity due to shutdowns.

Nonetheless, freeze protection valves do not necessarily completely prevent the formation of ice. In some cases, ice may still form as a layer on the inside of a pipe. This actually acts as a good insulator, reducing further heat loss to the cold outside air. Also, if the ice does not completely block the pipe or equipment flow area, no damage will occur. Damage due to freezing is caused when a pipe or flow passage in equipment is completely blocked. Then, as additional ice forms, the expansion associated with the ice formation compresses the water and causes a dramatic increase in the internal pressure in the line. When the pressure exceeds the strength of the pipe or housing, these will break.

When to use tracing – Tracing is required when the temperature to be maintained is above the resupply water temperature; that is, when additional heat input is required. Use tracing if the complexity of the equipment layout makes it difficult or impossible to properly bleed or drain the system. Also, tracing should be used if the discharge from bleeder or drain valves presents a handling problem. This may be the case in plant areas where all discharges must be controlled or reported, or where discharge treatment problems and expenses outweigh the benefits of bleeder/drain valves.

When to use valves – Valves are generally more economical to install and operate than tracing. Use valves in remote plant areas where steam or electricity are not available and the cost to provide them is high. Also, use valves when potential overheating from tracing is a problem. In critical applications, where power failures will cut off electric or steam tracing, select self-operating valves as either the primary or backup freeze protection system.

Circuit Solver is a self-actuating thermostatic recirculation valve which automatically and continuously maintains the end of each domestic hot water supply line at the specified water temperature. This simple inline valve completely eliminates the need for time consuming and expensive manual balancing procedures and equipment. By allowing only water that actually cools below the setpoint to flow to the return, the Circuit Solver also eliminates the need for oversized recirculation pumps which cause pipeline erosion and waste energy.

The Solution:
Install a Circuit Solver on each hot water supply branch line immediately downstream of the last run out to a hot tap.

Click here to see how the Circuit Solver Valve works

Australia has the highest average amount of solar radiation of any continent, making it the perfect place for generating power or heating water with energy from the sun. Not surprisingly, the combination of generous rebates and sunny weather has given rise to solar thermal installations across the continent. Generally these installations are quite straightforward, but in the southern part of the continent, temperatures can drop below zero (Celsius), causing freezing problems for some thermal systems.

END_OF_DOCUMENT_TOKEN_TO_BE_REPLACED

Need a refresher on the OSHA standard for safety showers and eyewash stations?

Imagine the following scenario: One of your plant floor employees has just had their eye or skin exposed to a caustic chemical, which needs to be immediately flushed from contact. Per OSHA regulations, you should already have an eye washing station or emergency shower on the plant floor, which the employee should be familiar with. In an instant, they need the proper water, at precisely the correct temperature, to prevent scalding or escalating the issue any further. Can you be sure that your employees are safe in a washing emergency?

END_OF_DOCUMENT_TOKEN_TO_BE_REPLACED 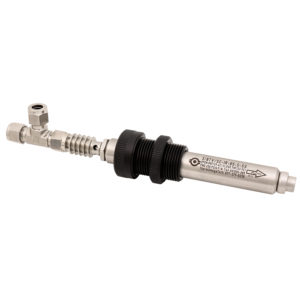 It could be the temperature inside your enclosure.

The most common systems used to keep enclosures warm involve steam or electricity – essentially using an outside heat source to keep equipment in the enclosure at a predetermined temperature. Electrical heating can take several forms. Typically, a radiant heater or heating cable is installed inside the enclosure. A thermostat is used to control temperature or the cable may be self-limiting. However, electrical heating has limits. In large installations, the electricity required can be ex- pensive. If combustible substances are present, the possibility of electrical sparks poses risk. And, if the cable breaks, everything beyond the break could freeze. 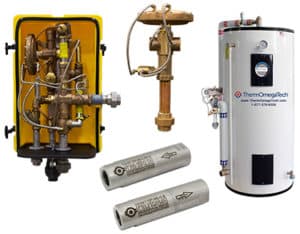 Keeping your safety shower working at optimum performance is important, no matter what time of year. However, cold winter temperatures can make this especially difficult. Water can freeze in supply lines, clogging the system and shutting off flow. And because water expands as it freezes, internal pressure in the line can increase enough to break steel pipes and their associated valves and fittings. The result can be costly replacement parts, in- creased labor costs, and a shower that’s out of commission while it’s being repaired.

Cold weather can bring other problems, too. Water that’s too cold can discourage workers from using the showers for the full 15 minutes as recommended by ANSI and OSHA standards, thereby contributing to worker injury. Although federal regulations such as OSHA’s 29 CFR 1910 do not mandate every detail of safety shower systems, they do specifically require safe work- place conditions. Unless you provide comfortable water for safety showers, these regulations can be easily interpreted to result in safety violations.

There are a number of steps you can take to prevent cold weather from interfering with safety shower performance. Many are relatively simple to implement and can be readily put in place before cold weather begins.

Read More About Is Your Safety Shower Ready for the Cold…

Water, when it freezes, changes from liquid to solid. As the temperature drops, the molecules become less energetic, moving more slowly, until they reach a point at which the molecular structure changes, followed by the transformation into ice, or solid water. Unlike most substances which shrink in volume as they freeze, water expands since ice’s molecular structure takes up more space than water. Conversely, when you heat water, the molecules become more excited until they reach the point where the water vaporizes and becomes steam.

There is a misconception that if water can be kept moving, it won’t freeze. Wrong! Water freezes at 32°F (0°C). Period.

Since the expansion of water as it freezes is a fact of life, what things should we know about this process in order to create effective means of dealing with it in industry? Water that has frozen in piping systems does more than simply clog the system and shut off the flow. Because ice takes up more room than liquid, when freezing occurs in a confined space like a steel pipe, the ice will build up extreme internal pressure which is often enough to break the pipe and its associated valves and fittings.

Damage from a burst pipe or valve can escalate beyond just replacing the broken parts, into labor costs for the repair and time/money lost from “down-time” in the affected area. Before effective measures can be taken to prevent such disasters, we need to learn about and understand what is happening.

The Physical Principles of Freezing

What are the underlying principles that determine whether the water in a given device (pipe, valve, etc.) will freeze? We already know that water freezes at 32°F. To arrive at this temperature, heat must be removed (transferred) from the water (Remember – heat always travels from high temperature areas to lower temperature areas). Heat transfer, or the removal of heat from one place to another (i.e. from the 45°F water inside a pipe to the 25°F air outside a pipe) is one of the basic laws of nature. Heat is a form of energy. Others include chemical, electrical, mechanical and nuclear, and each is convertible from one form to another. In the USA, heat is usually measured in BTUs, or British Thermal Units. One BTU is the amount of energy which, when added to one pound of water, will raise the temperature of that water by one Fahrenheit degree (as from 65°F to 66°F).

Click here to read the full article “Basics Of Freezing“

Warminster, PA (January 22, 2012) It’s hard to imagine a crueler fate for Fred Pirkle, an inventor whose 65-year-old hands have been in creative motion since he was a boy growing up in Texas.

“The first time I stood next to a lathe,” the Bucks County manufacturing executive recalled, “I was shivering all over. I was excited as I could be.”

The first time he got to run a lathe? “I was almost paralyzed with excitement,” Pirkle said.

Today, the excitement is still there, though a fast-moving form of amyotrophic lateral sclerosis, more familiarly known as Lou Gehrig’s disease, has shut down virtually all Pirkle’s voluntary muscle movement.