Over 95% of North American railroad operators rely on the GURU plug to protect their locomotives from freezing every winter. The tried-and-true GURU Plug monitors engine coolant water and will automatically drain the system should the water temperature  drop to 35°F or 40°F, depending on the valve’s set-point. This prevents the system from freezing and causing serious damage.

After the GURU Plug has “popped” and drained the system, the water storage tank must be refilled before the locomotive can be returned to service.  To shorten refill time and get your locomotives back up and running faster, ThermOmegaTech offers cold water refill accessories! 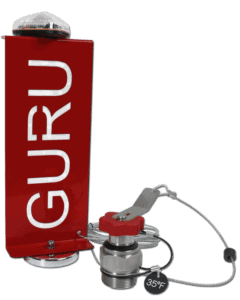 The clip at the end of the cable is inserted into the slot of the GURU plug’s resetting stem after warming the nose of the cartridge to keep the plug from “popping” as cold water is being added into the locomotive’s cooling system. 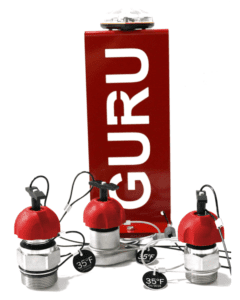 Used in conjunction with the anti-tamper domed cap, the key is inserted into the cartridge after warming its nose to keep it from “popping”. The plug’s resetting stem is not accessible, eliminating the ability to leave a penny or washer inserted.

The magnetic GURU flag with flashing light can be mounted to the side of the locomotive to serve as a visual reminder to remove the clip/key after refill.

By using one of these tools you prevent personnel from using a penny, washer or zip tie to keep the GURU Plug from “popping” and then forgetting to remove it before returning the locomotive to service thus rendering the valve ineffective in preventing freeze damage.